The Garmin Fenix 5, except for its larger brother, the Fenix 5, is the most comprehensive sports watch available today. It’s a significant improvement over the Fenix 5, with smart capabilities like music storage, NFC payments, maps, and more advanced navigation tools.

The Garmin Fenix 5 is waterproof to 10ATM (100m) and has GPS, GLONASS, and Galileo for optimal outside tracking coverage, as well as a variety of sensors such as Garmin’s Elevate optical heart rate monitor, a barometric altimeter, and a thermometer. In addition, external heart rate monitors, foot pods, and cycling power meters may all be connected to the Fenix 5 Plus through ANT+ and Bluetooth 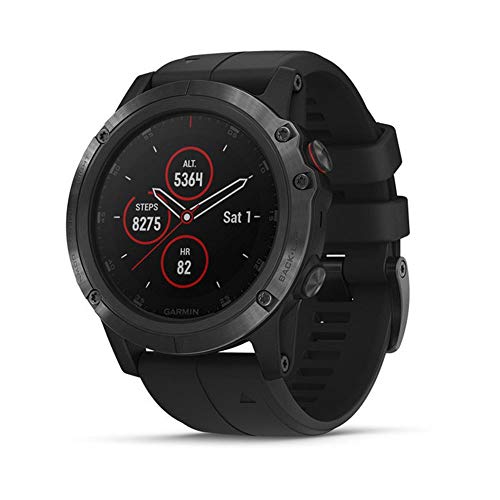 The Fenix 5 includes an always-on color display (a bonus) with a transflective surface that makes the screen brighter by capturing sunlight. Even in direct sunshine, I had no trouble reading the display. When you’re indoors, though, the screen, while still visible, is significantly darker than on most smartwatches. There is a backlight on it. The Fenix 5’s resolution of 218 x 218 pixels is smaller than that of smartwatches like the Samsung Gear S3 frontier (360 x 360), so it’s not as crisp, but it’s not a dealbreaker.

It features a sturdy appearance that appears like it could withstand some punishment, as befitting a watch designed for the outdoors. A beveled black bezel is held in place by five screws, and the 1.2-inch display is surrounded by five circular buttons (three on the left, two on the right). There’s an inner and outer bezel around the screen; collectively, they measure about half an inch, though the design mitigates this visually.

With its massive steel body weighing around 86g, the Fenix 5 is a beast (or 76g, if you opt for the titanium version). Of course, that’s a lot more weight than a plastic tracker like the Garmin Forerunner 935, which weighs 49g, but it’s a stylish, comfortable watch that you can wear everywhere. The watch is also compatible with Garmin’s QuickFit 22m bands, allowing you to replace the sporty silicone band with a metal or leather option if you want something more sophisticated.

The Fenix 5 can track a variety of indoor and outdoor sports, but it’s designed for use in the great outdoors, whether you’re running, cycling, swimming, or a combination of the three. The addition of Galileo tracking should ensure you don’t run into any satellite black patches. I was amazed by how accurate its distance tracking remained even when jogging through forests or city centers, where trees and tall structures might cause GPS to malfunction.

It also provides a VO2 max score (a measure of overall fitness), the intensity of your training over the previous week, and a race predictor, which shows how quickly the watch believes you’ll run a 5K, 10K, half marathon, and full marathon. The Fenix 5 Plus also includes Garmin’s sophisticated sleep tracking, which divides your night’s sleep into light, deep, and REM sleep, as well as any waking moments. It also keeps track of how much you move throughout the night.

Is It Worth It?

The Garmin Fenix 5 is not a cheap GPS watch, but it could be worth the money for outdoor explorers who need or want to record everything they do. It gives you thorough stats on various activities, has a reliable heart rate monitor, isn’t too heavy on your wrist, and charges quickly.

If your hobbies are mostly limited to running or bicycling, the TomTom Spark Cardio 3 or Garmin Forerunner 235 would be a better fit. On the other hand, the Fenix 5 may be just what you need if you spend every weekend in the woods, on a mountain, or by the sea.

Product sentiment (% of positive sentences about the product)
77%