Smart Glasses for the Visually Impaired: Do They Really Work?

Weak eyesight may have a substantial impact on people’s life and their ability to be self-reliant. As a result of technological advances, now these people can regain their freedom through smart glasses for the visually impaired.

Smart glasses for those with limited eyesight are a game-changer. They enable individuals with reduced vision to perceive the environment and execute things that they would not be able to do otherwise.

The most popular smart glasses for the visually impaired will discuss in this article. How they operate, how much they cost, and how they have aided individuals in their daily lives

What Does Visually Impaired Mean?

Smart Glasses for the visually impaired are for persons who aren’t entirely blind but still have some vision. Visually impaired indicates that the vision cannot be restored with eyeglasses, contact lenses, or surgery.

Hazy vision, night blindness, fuzzy vision, loss of central vision, and lack of peripheral vision are all examples of visually impaired people. You may be unable to identify loved ones due to poor vision. It makes it difficult to conduct everyday duties such as reading, cooking, and handicraft.

This affects one’s independence and quality of life. It is when high-tech spectacles come in to save the day and change people’s lives.

How Do Smart Glasses Work?

Following that, we will attempt to provide a quick summary of how Smart glasses for visually impaired function and the technical components that are involved.

Partially translucent displays that merge digital images with real-world objects may create using one of the two main technological strategies.

A curved mirror is a balancing act when it comes to this well-studied technology method. It is feasible to create a very compact device and light, but with restricted resolution and field of vision.

Curved combiner solutions may increase resolution and field of vision. It, however, comes at the expense of the gadget growing bigger and the visuals being less clear and detailed.

Companies are investing in alternate waveguide holographic optics technologies to avoid the trade-off game and constraints of the curved mirror solution.

This technology route offers an enhanced field of vision and resolution while maintaining a manageable device size. However, the technology is still in its early stages, and there has been no real-world evidence that this technique surpasses the typical curved mirror implementation.

The majority of Smart glasses for the visually impaired contain both audio inputs like microphones and outputs like speakers. The microphone may operate the gadget as well as do voice searches.

Speakers are there to provide you with auditory feedback and notifications. You may also listen to music, podcasts, and other audio educational and entertainment content.

Smart glasses for the visually impaired do not use typical earphones to transfer sound to your ears in many cases. Instead, bone conduction helps to carry sound into the inner ear through the skull bones.

People who use bone transmission audio equipment for the first time describe it as a strange sensation in which the sound seems to come from within your skull.

It is complex to use a regular keyboard or mouse to interface with the computer because of the glasses’ location. As a result, Smart glasses for the visually impaired use a variety of approaches for interacting with the Smart Glasses

Touchpads and buttons on the frame are used in specific glasses. The gadget may control by tapping, holding down, or swiping the controls. Google Glass combined the latter with speech recognition, which is another popular method to communicate with Smart eyewear.

Other glasses may control by suitable devices like your phone or a separate control unit. North’s Focals, for example, employ a ring that you wear to operate the gadget.

Cameras are now sophisticated and tiny enough that they can readily integrate into the frame of smart glasses. They can also capture high-quality images and videos of your adventures and activities.

It all sounds incredible in conception. As a result, one would anticipate a camera to be an essential component of Smart eyewear. However, privacy problems must consider.

Persons are concerned that people using smart glasses for the visually impaired may be secretly watching them. It was also one of the reasons Google Glass drew a lot of flak when it was first debuted.

In response to privacy concerns and inadequate laws, some businesses have recently produced Smart glasses that do not have a camera built inside them.

The Patriot ViewPoint’s main selling point is its incredible wide-field picture quality and ease of use. The ideal user is someone who has been diagnosed with Macular Degeneration, Stargardt’s disease, or any other kind of Central Vision loss.

Users may bring any distant item near to their eyes thanks to the broad, high-quality 101o viewable field display on a 4″ wireless monitor.

Along with different viewing duties, users may utilize the Patriot ViewPoint for close viewings, such as reading books, papers, and seeing adjacent things.

Many individuals have said how pleasant it is to see people’s faces, watch TV, and read the newspaper. It also features a very effective Optical Character Recognition (OCR).

The Patriot Viewpoint is recommended for people who are experiencing center vision loss. Ophthalmologists and other eye care experts urge to advise their patients to give it a try and see how much it helps. 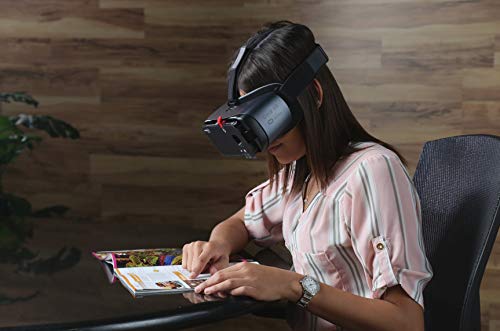 Vision Buddy is special in that it amplifies a direct feed from your television. It magnifies the direct TV stream once again. It is exceptional.

It is the key advantage, enabling users to enlarge their TV picture and lie on their bed and stare up at the ceiling, and their TV will transmit straight to the headset, enlarging the TV image up to ten times its original size.

Specifically created for a variety of poor vision eye problems such as Age-related Retinal Degeneration, Hypertension, Retinitis Pigmentosa, and others. It zooms in and out so you can watch a movie in your living room.

You can shift to magnifying mode with the push of a button to view the world around you. It’s as easy as that. Make sure that you get a personal demonstration.

Users appreciate the NuEyes e2+ Wearable Electronic Magnifier because it is significantly lighter than other wearables, and the reduced weight is balanced on both the back cushion and the front, making it quite comfortable.

Because of the NuEyes e24K +’s Ultra HD screens, customers are quick to comment on how clear the world seems to them. It is so easy to use that consumers need three buttons to operate it.

Button one allows you to choose a varied magnification depending on whether you want to read, watch TV, or examine a loved one’s face.

Use the second button to choose one of three possible contrast levels based on your eye condition. The third and last button is for OCR/text-to-speech conversion.

It allows OCR, or Optical Character Recognition, to read the text to you if your eyes get fatigued from reading or if you have eye strain.

The NuEyes e2+ has a 101o field of view, autofocus, and some more features like; an easy-to-use three-button control, variable magnification up to 18x, contrast – black on white, white on black Wireless 2 to 5 hours of battery life, a lightweight design, a one-year warranty, and the ability to stream television and movies.

Function and purpose are the essential pricing differentiators.

Keeping these factors in mind, the price of Smart glasses for the visually impaired might start at $500 and rise to about $5000. The wide price range is due to various technological implementations and the items’ target market.

As a result, the higher the price tag, the more particular and highly sophisticated the components.

The Future Of Smart Glasses

However, this technology seems to be a luxury for many people, it is worth studying if Smart glasses may use to enhance the lives of those who are visually impaired.

Previously, the notion of recovering sight seemed to be science fiction, but with the introduction of smart glasses for the visually impaired, it is quickly becoming a reality.

People who are legally blind in the United States have central visual quality less than 20/200 in the good vision with the best available treatment.

There is a treatment to enhance sight in two visually impaired people, the method is likely to be decades away from becoming regular practice. In the meanwhile, how might smart glasses for the visually impaired assist individuals with vision impairments? It’s been argued that technology isn’t necessarily good or evil; instead, how we utilize it decides whether it’s a benefit or a hindrance to society. Ever wondered what are the benefits of augmented reality. Can that technology be an integral part of our lives?. Even basic tasks like going to the department store to get