In most regards, the Samsung Gear Fit Pro 2 is a slightly better version of its predecessor. It offers more fitness-oriented features, such as 50-meter waterproofing and continuous heart rate monitoring. 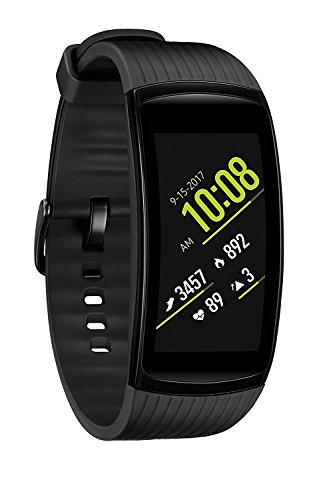 The Samsung Gear Fit 2 Pro isn’t a game-changer when compared to its predecessor, but it does deliver the fitness tracking that many smartwatch users crave.

The key selling point of this smartwatch is that it supports Spotify’s coveted offline mode, allowing it to function as a standalone music player that sends music to your wireless headphones.

The Samsung Gear Fit Pro 2 and its predecessor have very much in common. The size of the battery is the same. The processor, screen size, and overall design haven’t changed, and you’ll still get built-in GPS to track your runs and walks. Many of the changes just emphasize long-standing flaws.

On a wearable, the AMOLED screen is one of the brightest and sharpest. The high brightness and vibrant colors make navigating the Gear Fit2 Pro’s menus a breeze, ensuring that it remains legible even in strong lighting that renders many competing trackers unusable. Because the interface is vertical, all of the metrics are immediately visible. Simply place your palm over the screen to put it to sleep.

Unlike some gadgets, this one detects signals almost instantly, is dependable, and, despite the battery drain, watching your path plotted on a colorful map on the screen is unquestionably enjoyable.

The Gear Fit 2 Pro, unlike the original Gear Fit 2, has the same 5 ATM water resistance as the Apple Watch 3. This implies it can withstand being submerged for up to 50 meters.

Compatible with Android and iOS

The Gear Fit 2 Pro is compatible with both Android and iOS (tested). The pairing procedure is straightforward: download Samsung’s Gear app and then follow a series of on-screen steps to link the wearable to your phone. You may then choose which fitness and entertainment apps to install on your Gear Fit 2 Pro.

When you go for a run, the Gear Fit 2 Pro can automatically detect and log your activity, eliminating the need for you to manually pick this option. Although it does a good job of recognizing basic sports like long walks and park running, the wristwatch has a habit of recording even trivial tasks like cooking dinner.

Battery life is a problem. The Gear Fit 2 Pro’s 200mAh battery, according to Samsung, may last three to four days on a single charge. Given the number of activities performed with the watch, it seldom lasts more than two days. The fact that the older Gear Fit 2 has a considerably longer battery life is also strange.

On the Gear Fit 2 Pro, Samsung has improved the watch face customization options. Not only can you change the statistics displayed on the home screen, but you can also change the color and typeface. This helps to personalize the gadget, and the Gear Store also has hundreds of additional watch faces.

Product sentiment (% of positive sentences about the product)
75%