The Fitbit Versa 2 improves on its predecessor in a number of ways. The AMOLED display is a wonderful addition, and all models now include Fitbit Pay. It’s also a fantastic activity and health tracker. On the other hand, Fitbit is still working out the smartwatch part. Fitbit’s third-party app catalog is still weak, and Amazon Alexa integration is difficult. However, for under $200, the advantages outweigh the disadvantages. The Versa 2 offers a good overall wearable experience, although with a few flaws. 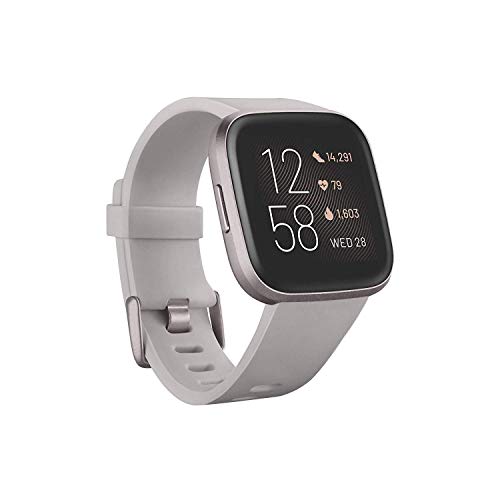 With the Fitbit Versa, Fitbit had a smash on its hands. It was a less expensive and easier-to-use alternative to the cumbersome Ionic. More crucially, it demonstrated Fitbit’s ability to create a true smartwatch, rather than just a fitness tracker with smart capabilities. The Versa wasn’t perfect, and it only entered our list of recommended smartwatches after receiving some much-needed software updates. The Fitbit Versa 2 is now available, trying to correct some of the flaws with the original wristwatch. It succeeds, but certain problems remain unsolved.

The Versa 2 is compact and light, making it comfortable to wear throughout the day and night. Fitbit has a variety of straps available for the Versa 2 line, all of which are backward compatible with the original Versa. The basic model has a simple silicone strap, but the special edition model has woven and silicone straps.

The move to an AMOLED display is the most significant design improvement. The LCD panel of the Versa appeared washed out, but the Versa 2’s AMOLED screen gives the watch a much more expensive appearance. It has deep blacks and wide viewing angles, allowing the screen to blend in with the massive bezel. It’s also 1.4 inches bigger this year. Fitbit was also able to incorporate an always-on display option because of the AMOLED panel. Now, a small number of watch faces (both first- and third-party) support the always-on display, so you’re not stuck with the watch’s default digital or analog design. Because not every watch face is supported, developers who want their watch faces to operate with the AOD will have to integrate this feature themselves.

Most Fitbit smartwatches have had performance issues, but the Versa 2 has fixed that. This time, Fitbit introduced a faster processor, so navigating the Fitbit OS UI is no longer a chore. The Fitbit app, which offers you a clear, easy-to-understand summary of your exercise stats and is a lot easier to read than competitors, has always been Fitbit’s primary strength over any other watch or fitness tracker. Even though it lacks a native GPS radio and relies on your phone for GPS tracking, the Versa 2’s fitness monitoring features are the greatest and most complete of any smartwatch.

The Versa 2 can receive notifications from your smartphone, and you can answer or reject phone calls independently of your phone’s operating system. You can view calendar invites and SMS messages on the watch if you’re using iOS, but you can’t respond to them. If you’re using Android, you can utilize the Versa’s microphone to dictate responses.

Watchfaces are a particularly sensitive subject. Because the Versa 2 can only hold one watch face at a time, you must replace it via the mobile app and transfer it to the watch if you wish to try a new look. You have to go through the entire process of searching for the watch face you were using in Fitbit’s app and redownloading it to the watch if you want to go back to it, and there’s no ability to save a set of favorites in the app for easy access, let alone numerous looks on the watch at the same time. Furthermore, the great majority of watch faces offered are subpar and do not complement the sleek hardware of the watch.

Is it worth it?

All of the features users liked about the original Fitbit Versa are improved with the Versa 2 is a fashionable and lightweight design, feminine health tracking, long battery life, and intelligent sleep tracking. I enjoy that Spotify is now supported, but I wish I could download songs from it as I can with other fitness-oriented smartwatches. The addition of Alexa is a nice touch, but it doesn’t work as well as it should, and if you want GPS’

The Versa 2 is unquestionably superior to the Versa 1, and the design improvements and new functions are largely welcomed. But it’s not a more enticing device than it was before: it’s a great fitness tracker, but if you’re looking for a smartwatch, other options are better.

Product sentiment (% of positive sentences about the product)
85%