The Fitbit Charge 5 is the first in the Charge series to feature a full-color display. It also has a few smartwatch capabilities that are carried over from previous Fitbits. 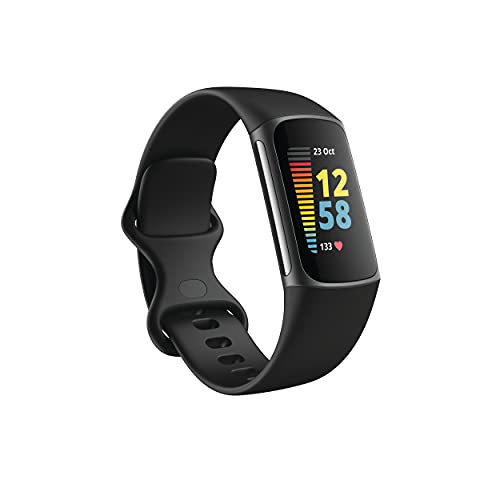 A decent fitness tracker is the Fitbit Charge 5. It includes functionality not found on most other trackers, such as an EDA scanner. It also contains capabilities that are only available to premium trackers, like support for NFC payments.

The Fitbit Charge 5 has a bright, full-colour OLED display, which immediately elevates it above its predecessor in terms of aesthetics and functionality. It’s the first Fitbit tracker with a colour screen.

The Fitbit Charge 5 includes a heart rate sensor, SpO2 monitoring, sleep tracking, and step tracking, as well as the majority of the health functions seen in earlier Charges. Unfortunately, because it lacks an altimeter, it is unable to track floors and other height-related motions. It also contains a sweat/stress sensor called an electrodermal activity (EDA), which was originally seen in the Fitbit family.

As a result of the new colour display, the total battery life is reduced. One can only use the device for 72 hours. It comes with a proprietary magnetic charger, however, there is no wall adaptor.

The Fitbit Charge 5 monitors your steps, sleep, and stress levels, as well as provides inbuilt GPS for distance workouts. You can track 20 workouts, including running, swimming, cycling, yoga, and more, much like with the Charge 4. However, unlike some other Fitbits, if you have more than six workouts that you track on a regular basis, you’ll have to manually swap them out using the Fitbit app on your smartphone when necessary. In your exercises, the Charge 5 lacks the ability to record real-time laps. You can always manually add laps in your Fitbit app afterwards.

The Fitbit Charge 5 comes with built-in GPS. This eliminates the need to bring your smartphone along to track GPS parameters. However, onboard GPS is a battery-hogging feature, so the Charge 5 also offers connected GPS, in which your smartphone’s GPS does the work and just transmits that data to the tracker. You can choose one of these two types of GPS tracking for all your workouts. You may also enable Dynamic GPS, which allows the tracker to switch between its own sensor and the one on your phone when one connection is stronger than the other.

The Fitbit Charge 5 may now get notifications from your smartphone. The device displays emails, text messages, and phone calls. You can even read the majority of text-based notifications right on the tracker if they are text-based. You can then instruct the tracker to open or dismiss the message on your phone, which will remove it from both the tracker’s and your phone’s notification lists. On the watch, however, you are unable to respond to any of these communications.

The tracker doesn’t have any music functionality, and it can’t store music either. There is no built-in digital assistant, no weather app, and almost no third-party apps available.

Product sentiment (% of positive sentences about the product)
79%