The Casio ProTrek WSD-F30 smartwatch boasts a slew of handy functions and is built to last, making it easy to keep track of serious outdoor activities. It’s a smartwatch designed for Android users who enjoy outdoor activities. It’s well-made, accurately monitors activities, and has a long enough battery life. However, it appears to be a bit costly, with the additional software feeling thin compared to the platforms of established dedicated fitness trackers. The Casio Pro Trek WSD-F30 has the potential to be a lot more than it is right now. 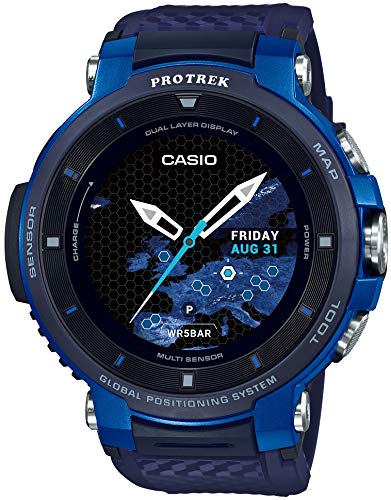 The Casio ProTrek WSD-F30 is a Google Wear OS smartwatch designed for those who like to get out and about. It’s built to withstand strenuous exercise and has several sensors for tracking outdoor activities like cycling, hiking, fishing, and swimming. Color maps and GPS are included, as well as a dual-layer display to help save battery life. However, its hefty price is difficult to explain with an obsolete processor and no heart rate monitor.

Casio’s smartwatch is distinguished by its dual-screen technology. It contains one standard color screen, just like most other smartwatches, but it also has a second monochrome refractive LCD panel on top that constantly displays the time. It’s a 1.2-inch OLED dual-layer panel, in essence. You can choose between the two depending on how much battery power you want to utilize and which functions you require. Even in direct sunshine, the information looks sharp and brilliant thanks to the 390-by-390-pixel resolution. It’s also extremely sensitive to the touch.

The Casio Protrek WSD smartwatch has a dual-layer display that conserves battery life. With its dual-screen design, the Casio outperforms most of its Wear OS competitors in terms of battery life. However, the difference isn’t as evident when used as a conventional smartwatch. It will only last around two days before it needs to be recharged. Users have also expressed dissatisfaction with the charger’s poor design, which includes a clumsy charging wire. It also charges slowly, and the charging cord and connector are easy to unplug.

Lots of sensors for outdoor use

The Casio ProTrek has a lot to offer. It comes with a standalone GPS with GLONASS, offline maps, and a slew of data sensors that range from altitude to atmospheric pressure.

A pressure sensor (for air pressure and altitude), an accelerometer, a gyrometer, and a compass are all included. Unfortunately, the F30 is powered by a Qualcomm 2100 chipset rather than the 3100 Wear chip, which is outdated. Almost everything runs smoothly, although sometimes the UI slows down or simply stalls, particularly when accessing apps like the Play Store or Weather. Wear OS is the operating system used by the watch. The F30 isn’t the most precise or reliable tracker on the market, but it’s adequate. The only thing lacking on such a costly smartwatch is a heart-rate monitor.

The activity tracking functions, which this watch excels at, set it apart from many others.

Like its predecessor, the Activity app can track various outdoor activities such as trekking, canoe/kayak paddling, cycling, snow sports such as skiing/snowboarding, and even fishing. This is certainly not a watch for gym-goers or runners, given the variety and the lack of a heart-rate sensor. This is a unique type of activity tracker that focuses on outside tracking.

The Casio’s ProTrek WSD F-30 is built for the outdoors. It’s tough and sturdy, with MIL-STD-810 certification and water resistance up to 5ATM. However, with a face that measures 2.3 by 2.1 by 0.6 inches (HWD), it’s rather hefty, and the band, even after tightening it to the last notch, feels fairly huge on smaller wrists. It’s also weighty to wear all day and throughout exercises, weighing it 2.9 ounces.

No companion app for activity syncing/viewing

One disadvantage of the Casio ProTrek WSD F30 is that it currently lacks a core app that logically groups activities, data, and historical records. Instead, the numerous capabilities are divided into separate applications, and you’ll have to figure out which one does what before you can comfortably manage the F30’s arsenal of features.

Product sentiment (% of positive sentences about the product)
47%